On the afternoon of Saturday March 19th, along with the Cinq Ports Wind Quintet, we performed in Stockbury Village Hall. The lively programme included some popular Gilbert and Sullivan choruses, highlights from the Phantom of the Opera, and much loved traditional English folk songs. Audience, singers and musicians were treated to a delicious afternoon tea, and over £500 was raised towards renovating the kitchen in the lovely old village church. More photos. 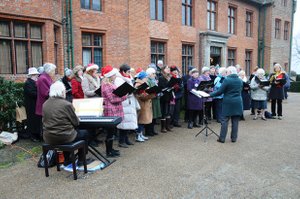 On a misty grey Saturday afternoon in December 2021 the choir gave the second of two lovely Christmas recitals, this time to an audience of young and old in front of Chartwell, once Winston Churchill's country home near Westerham.  They were held spellbound by a wonderful rendition of John Peterson's Carol of Christmas and John Rutter's beautiful Angels' Carol. And from all over the hillside they joined in some of everyone's favourite carols. Some of those who watched had been lucky enough to attend our full concert the previous week in Kemsing - one of our best ever - and to get to know choir members better afterwards over a glass of mulled wine and a mince pie. Jackie, who has been to many of our concerts over the years, wrote that "the Singers lighted our way towards Christmas with a good dose of cheer and tuneful singing.  I will most certainly attend at both events next year."

Watch us singing at our Christmas concert in St Edith's Hall, Kemsing on Saturday 11th December. We were accompanied by Hilden Brass and raised £750 for Slide Away, a charity supporting bereaved children and young people in West Kent. The concert was followed by refreshments for singers and audience, a chance to get together after two years' absence from Kemsing. 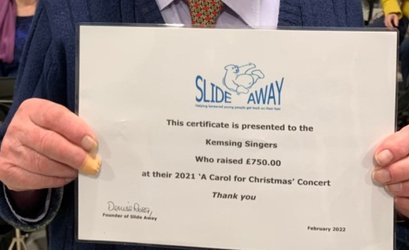 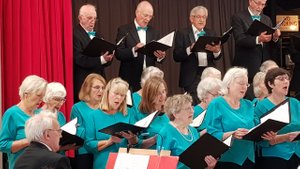 This was our first public performance since the start of the pandemic, and what a joy it was to be singing together in front of an audience after so long. With just a handful of rehearsals behind us we sang some old favourites with a summer theme, including works by Cole Porter, Simon and Garfunkel, and John Rutter. The audience loved the programme, singing along in places. It even resulted in some new faces at our open rehearsals a couple of weeks later! 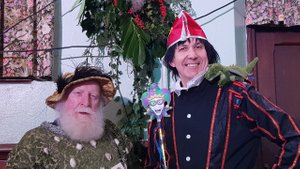 Our Christmas concerts on December 13th and 14th December 2019 in St Edith Hall, Kemsing, saw us caper joyfully through an Elizabethan Christmas. Proceedings were led by Chris Pottle as the anarchic Lord of Misrule, and were graced by the presence of his Majesty King Henry VIII (pictured above). The Wealden Recorder Concert provided that wonderfully authentic sixteenth century sound.

The choir was directed by Sara Kemsley, and accompanied on piano by Peter Young.

The concert raised £600 in aid of the new church hall for St Mary's Church Kemsing.

Thank you to all who came to our concerts and whose enthusiasm and singing contributed to two memorable evenings. 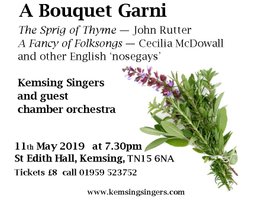 We presented a joyful programme of folk-inspired music to celebrate the season of blossoming hedgerows and new life returning.  We were joined by a merry band of instrumentalists to perform wonderful works about the people and places of the British Isles. Featuring John Rutter's Sprig of Thyme and A Fancy of Folksongs by Cecilia McDowall.

Pamoja Hall at The Space at Sevenoaks School, TN13 1HU.

Kemsing Singers and the Sevenoaks and Tonbridge Concert Band  presented a joint concert of lively and popular music to suit all tastes, in aid of The Silas Pullen Fund.

Included were compilations from musicals and opera such as Chess, Phantom of the Opera and Verdi choruses and much, much more.

Band : Danzon No.2 by Marquez, Highlights from Chess by Ulvaeus/Anderson

Choir: Over the Rainbow from Wizard of Oz, Sounds of Simon and Garfunkel, Rhythm of Life from Sweet Charity, Phantom of the Opera.

Proceeds from the concert were in aid of the Silas Pullen Fund, and raised an impressive £542 for the Brain Tumour Charity